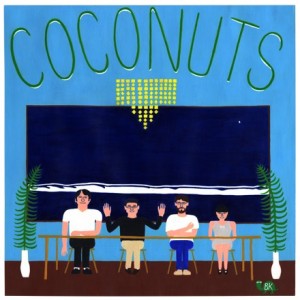 Coconut is a SF based art-pop group formed by Tomo Yasuda (Tussle, Hey Willpower) and artist and publisher Colter Jacobsen about 10 years ago. Both dudes were part of an earlier group called Window Window and Lets, a side project of Deerhoof’s Satomi Matsuzaki. They’ve been recently joined by the Japanese keyboardist and vocalist, Keiko and bass player Justin Loney.

They musically move in many directions from fragile folk songs to chamber pop to more rhythmically inspired mantras and experimental noise excursions, often pulling lyrics from found poems or pop songs that can be quite off the cuff and humorous, with an extreme sense of twist and a total sincerity which make us feel like in Brautigan story.

Their first album “Coconuts”, on heavy rotation at the Tippex Towers, has been released at 300 copies only by Oakland-based art-publishing concern, Land and sea on various colors of vinyl, and features covers of Leiber and Stoller‘s “Searchin’ ” and a slammin’ version of Arthur Russell‘s post-disco classic “Is It All Over My Face”.

We’re so much in love with their music that we wish to bring them to Europe at some point soon. Don’t hesitate to get in touch with your possible shows ideas and we’ll make it happen!

Music Video for Techno by Coconut from The Heap on Vimeo.