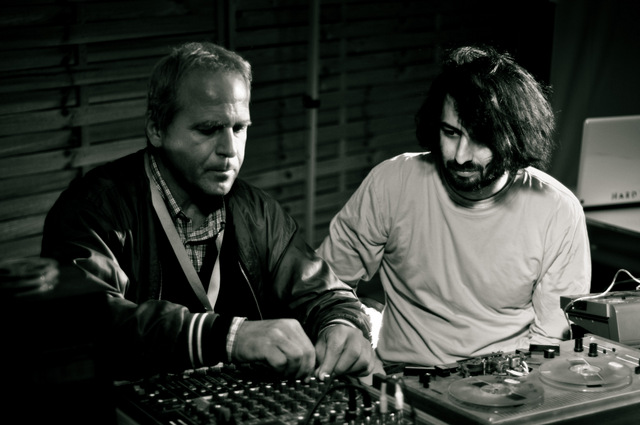 Strut Records, in association with Future Nuggets and Ambassador’s Reception, are honoured to release the first full LP of original material from enigmatic composer Rodion Roșca. Created in the early 80’s in Romania using experimental recording techniques and a custom set-up of reel-to-reel machines, guitars, synthesizers and effects units, this music is simply unlike anything else, and has received received no official release until now. 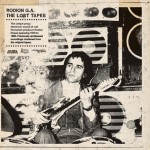 The year is 2012. A silver-haired man is gesturing slightly nervously on the stage of an electronic music festival in Bucharest, Romania. A moment of silence seems to prepare the crowd for a significant event. In front of him, on a desk, two Tesla reel-to-reel machines are starting to run a bunch of magnetic tapes that are older than most of the people gathered for this long-awaited occasion. The spacious sound of flanged, phased and fuzzed electricity sets off a back-in-time odyssey that will last 50 minutes.
.
34 years ago in Romania, Rodion Ladislau Roșca founded a group that came to deliver an alternative sound that was completely unique in the claustrophobic cultural landscape of those times. With only two tracks ever having received an official release (via a compilation LP on the State-owned Electrecord label), the music of Rodion Roșca’s band – composed and recorded almost entirely by its leader – has been secretly kept on dusty tapes ever since. Unheard for decades, it is finally being made available as Strut, in conjunction with Ambassador’s Reception and Future Nuggets, presents the first ever retrospective of Rodion G.A.

.
Rodion’s music dug a subterranean niche completely opposed to the polished surface of the mainstream sound during the last prolific period for Romanian rock bands between 1978 and 1984. The music functioned as an impossible, dark and romantic counterpoint to the stifling atmosphere of the country under the Ceausescu regime.
.
Rodion himself was an enigmatic figure. Half-Hungarian and half-Romanian, he grew up during the brief “open” period of 1965 to 1972 when American and English rock bands, jazz legends and international pop stars were regularly played on the radio. He lived near the border with Hungary, in Cluj, a city with a healthy music culture that spawned important prog rock groups including Cromatic and Experimental Quintet. Here, Rodion managed to find vinyl and, during the ‘70s he became known amongst friends as “King Of Records”. As such, he became steeped in the major Western artists of the era – Hendrix, The Beatles, The Who, Zeppelin – and discovered many of the more progressive and electronic bands from both East and West like East Germany’s Karat, Yes, Jethro Tull, Syrius and Skorpio from Hungary, Kraftwerk, Emerson Lake & Palmer, Matador out of Czechoslovakia and many more.
.
From the start, Rodion was concerned with his own style of composition and set himself apart from the rock template that dominated Romanian music during the late ‘60s. Technically and in his compositions, he was obsessed with every detail of his sound. His first sessions, as a teenager, were recorded on tape during 1969-1972 – simple, sparse and haunting pieces using reel-to-reel recorders and based around vocals, guitars and improvised drums.
.

In 1975-6, Roșca formed Rodion G.A., the ‘G.A.’ comprising band members Gicu Fărcaș and Adrian Căpraru. Roșca had amassed equipment and became a DIY tech wizard, improvising his own techniques of composing using reel-to-reels. Surrounded by three or four Tesla tape machines, he would record beats and guitar on one channel of the tape, then stop and add other instruments on the other – a raw means of multi-tracking. He would use the other machines (transforming a Tesla into an echo machine) to add effects and delays on both instruments and vocals. Other tools in his armoury included an East German Vermona drum machine, a toy Casio VL Tone and a little Soviet-made Faemi organ to which he added phaser, flanger and fuzz pedals.
.
During Rodion G.A.s active period, there was only one label operating in Romania, the State-owned Electrecord, and the band recorded two tracks at the station’s studio, which surfaced on the compilation Formații Rock Vol. 5, in 1981. The band recorded five further songs at another Electrecord session which remained unreleased apart from radio airings. During the recording session at Radio Cluj, Rodion asked the sound engineer to allow him to record all of the instrumentals onto his own Tesla machine, directly from the main mixer. Within his later productions, he would sample drum parts from this session to build new tracks. Other pieces (including some made by Rodion at home on tape machines) were picked up by national radio and Rodion G.A. even hit the top of the Romanian charts for several weeks. Beyond this brief but intense exposure, no other recordings surfaced. Undeterred, the band toured extensively during the early ‘80s.
. 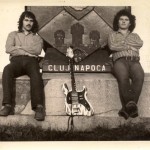 For the band’s gigs, Rodion made his own rig by hand, complete with ‘Rodion G.A.’-branded speaker boxes and amps. From the start, the band’s sound was incomparable to other contemporaries. Other Romanian musicians like Mircea Florian had moved from a folk-rock background to experiment with more electronic productions but Rodion was different, concocting dense, visceral synth sounds set against raw programmed rhythms, intricate, unusual arrangements, with prog and classical touches.
.
Despite the much harsher political conditions post-’72 (the “July Thesis” of Ceaușescu), with the grip on culture and society becoming increasingly strict, a live rock scene continued to exist in Romania during the ‘70s and early ‘80s. Gigs mainly happened within a network of festivals around the country and, during the summer, in seaside towns at restaurants and clubs. Bands would push the rules, often playing Western covers and venue owners had to be careful, getting to know when inspectors might drop by. Rodion was no exception and would need to dodge the censorship absurdly often. He remembers one occasion when an inspector came to listen to a band sound check. Despite singing in Romanian, the official pulled them up for singing “yeah yeah yeah” during a chorus.
.
Other plans nearly materialised – Rodion scored the soundtrack to an animated movie, ‘Delta Space Mission’ in the mid-‘80s but the tracks were refused by the film company who then employed prolific Romanian electronic / pop producer Adrian Enescu for the job. Rodion also composed soundtracks for a theatre play and a ballet, both performed at Romanian National Opera in Cluj, and wrote some scores for gymnastic routines (including ‘Diagonala’). But all of these projects, despite positive feedback, proved to be ephemeral and soon Rodion disappeared from public view.
.
The band’s only remaining documented performance during their career was a show on Romanian television celebrating New Year’s Eve in 1980. Rodion G.A. eventually split in 1987 after a gig at the Mangalia Festival and Rodion then walked away from music completely following the death of his mother.
.
Fast forward to 2012. Blogger and film-maker Luca Sorin is intrigued by the mythology around Rodion G.A. and, after months of hunting, tracks down Rodion Rosca, and posts a handful of tracks and video footage of the band’s 1980 New Year’s Eve concert online. The links come to the attention of young Romanian crew, Future Nuggets, a collective of producers and musicians as dedicated to unearthing Romania’s musical past as they are to forging new sounds and fusions for future traditions and the global community of beat diggers. Then, further conversations, a live comeback gig in Bucharest, the first in over 25 years. A partnership with Steve Kotey of Ambassador’s Reception leads to a compilation of Future Nuggets’ own studio work, Sounds Of The Unheard From Romania in 2012 and a release from their acclaimed psych-jazz project, Steaua de Mare, in April 2013.
.
A strange and very precious artefact, the powerful music of Rodion has a special place in the unofficial museum of sonic oddities made behind the iron curtain. Strut, in association with Future Nuggets and Ambassador’s Reception, are honoured to release his first full LP, delivering the tracks – made in the past but undoubtedly for the future – that will earn him a deserved place in the international electronica pantheon. Rodion G.A. The Lost Tapes is released on May 28th 2013, remastered from the original tape reels.
.
Rodion G.A. backed by Steaua de Mare are available for shows from 2013 onwards
Travel party : 5 musicians + 1 tour manager
Rodion + Steaua de Mare backing band are based in Roumania
.
Booking contact
.
Backline rider