I found this clip again after 20 years:

When I was about 15 years old VPRO broadcasted a doc about Punk in the Netherlands showcasing The Ex, poet Diana Ozon, comic artist Peter Pontiac, grafitti artist Dr. Rat and a Dutch band called Soviet Sex consisting of a group of painters. Of the latter band the doc fragmented a song which struck me immediatelly and I never forgot about it, searched for quiet some years and couldn’t find the lp of the band, which is sold out for years.
The singer of the band was visual artist Maarten van der Ploeg who died in 2004 at the early age of 46. Out of dedication his music clips appeared on YouTube and I refound the clip which was shown in the doc. The chorus is very Joy Division I recognised after reviewing. Besides Maarten the band consisted of his brother Rogier and the famous painter Peter Klashorst and another painter Bart Domburg. The band disbanded in the early 80s, because the members focused more on their painting carriers which received wide attention.

The brothers Van der Ploeg continued in the, in my opinion lesser intruiging, Blue Murder, although a few of the bands songs have a gentle link with the music of the Talking Heads. Also Astral Bodies and Interior were bands Van der Ploeg played in.

In the 90s Soviet Sex briefly reunited, this time with Ellen ten Damme added to the line-up. But that aera is not for me, although the naked press pic is challenging 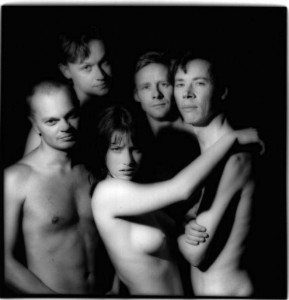