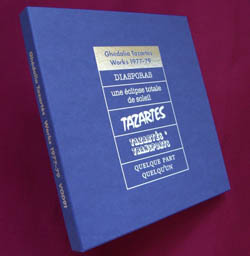 “4LP-Box with 10″ Tazartes Transports, Tazartes, Diaspora, Une Eclipse Totale De Soleil, and Quelque Part Quelqu’un. The French artist and autodidact Ghedalia Tazartes who is born in Paris in 1947 is a true nomad spending more than 30 years within musical practice and experimentation. Ghedalia is the orchestra and a pop group all in one person: the self is multitude and others, freely connecting the sounds, the rhythms, his voice, his voices. The extra-European music opens the ear to Ghedalia’s intra-European exotism. The permanent metamorphosis is a principle of composition; it escapes control, refuses classification, diametrical to the purists of synthetic culture and technocrates of noise. He wanders through music from chant to rhythm, from one voice to another. Utilizing magnetic tape recorders, he paves the way for the electric and the vocal paths, between the muezzin psalmody and the screaming of a rocker. He traces vague landscapes where the mitre of the white clown, the plumes of the sorcerer, the helmet of a cop and Parisian anhydride collide into polyphonic ceremonies. This box concentrates on his early works from 1977-1979 and his four officially released vinyl-LP’s plus a 10″ of an unreleased work from 1978. All the material is superbly remastered for vinyl by Anders Peterson of www.ghostsounds.net pushing the overall quality and dimension in sound to an amazing new level and experience.”
VYNIL ON DEMAND