Chloé has, without a doubt, led an entire generation to her electronic music playground – one that goes beyond strictly club and techno.

Chloé is a composer, meaning she gives life to an artistic idea. And working with electronic means allows for the possibilities to be expanded tenfold. The challenge is to keep a kind of certainty in spite of the doubts that arise throughout the creative process. It is precisely this inner questioning, this contradiction (and the decisions that provide solutions to it,) that nourish and motivate Chloé’s work.

As much a film music enthusiast as an accomplished guitar player, she stumbled into the electronic scene early on, developing an unwavering curiosity for sound machines. Her appetite for vinyl would substantiate a DJ career full of subtle explorations. Since her first EP, Erosoft (2002), Chloé, not satisfied with merely stringing together purely functional tracks, has been telling stories.

Many EPs and remixes would follow, on labels such as BPitch Control, Live at Robert Johnson, Kill the DJ, My Favorite Robot, or Throne of Blood, and would open her up to headlining gigs at clubs around the world, having built a reputation for sets that thrill by the sense of coherence with which she reconciles eclectic styles.

An obsessive seeker of new sounds, she assembles and blends together unlikely tracks, creating subtle contrasts that come together into singular mixes. Her two LPs fit within this narrative continuum: The Waiting Room (2007) and the Victoires-nominated One In Other (2011), with their deft handling of aesthetics, have stood the test of time.

This desire to eschew readymade formulas, and her constant research into musical and human matters, gave her the impetus to start her own label, Lumière Noire. The label provides her with a platform to help her protégés – a selection of artists such as Il est Vilaine and Sutja Gutierrez, whose work she fell in love with during her many travels – to hatch their projects. That is because one of the main characteristics of her two decade-long career is not only her exacting standards, but also her curiosity, a trait that inevitably leads to interesting encounters along the way.

Her collaborations are the other engines of his permanent reinvention: with her willingness to step into the other artist’s perspective, she seeks to undermine the pitfalls of facile references, injecting a constant element of surprise. These reconciliations encompass all musical genres and disciplines, and create lasting relationships, as with the duo Nova Materia, whose records she now produces.

Chloé has also ventured into musical analysis, working alongside Ircam (the French institute for music and sound science,) which opened her up to a completely different reading level, encompassing everything from electro-acoustics to the spectral school, ultimately enriching her sound palette. She furthered this approach by revisiting Steve Reich for the “Variations” series for France Télévisions, improvising in duet with academically-trained Bulgarian percussionist Vassilena Serafimova.

Forever inclined to push the boundaries of her art, she gladly absorbs any and all innovations, such as 3-D binaural spatialized sound, as with her collaboration with French national radio (including the “Séquences” collection in collaboration with its TV pendant France Télévisions.) Similarly, Chloé collaborated with Ircam on an interactive live project, “Chloé x IRCAM,” in which the public was invited to interact with music. The project took the form of an ever-evolving permanent installation.

Beyond that still, Chloé works to set music to image. The soundtrack of Lidia Terki’s film Paris La Blanche, on which she collaborated through its short-form origins all the way to its feature-film incarnation, notably led her to compose for the first time using the oral tradition of Kabyle musicians, leading to improvisational ephiphanies. She was awarded the Cinémathèque Française’s commission for the music of Hitchcock’s last silent film Blackmail, as restored by the British Film Institute. The result is a humbly subtle, yet just, live interpretation of an original score, which accompanies the film without overpowering its image.

Chloé naturally continued to broaden her discourse towards the contemporary art world, collaborating with Franco-Lebanese artist Anri Sala on a live score for his video “Ravel Ravel Unravel” at the 2013 Venice Biennale. This year, it is the artist Xavier Veilhan who invited her in residence at Venice Biennale’s Studio Venezia, of which he is curator, and where she will create a new play in July 2017 in collaboration with Vassilena Serafimova.

Chloé released in 2017 her third album Endless Revisions, an impressively rich and mature outing, on her own label Lumière Noire Records. The album cover features the work of artist Noémie Goudal, whose dialectic exploration of natural and built environments echoes Chloé’s sonic landscapes. Goudal also photographs her own monumental installations, which evoke the desert, the mountain, which inspired the title that serves as a title to one of Endless Revisions’ tracks. To the question of why he insisted to climb Everest, English mountaineer George Mallory famously replied “because it’s there.”

An answer that sums up the appetite that Chloé herself has for the world around her.

Chloé has a number of Art Projects: 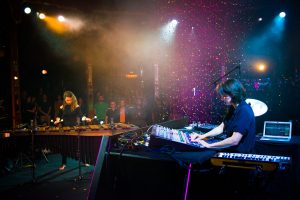 Chloé and classical percussionist Vassilena Serafimova were invited to create a Tribute to Steve Reich by French TV producers. They both enjoyed it so much that they decided to take the project further. Among many concerts they performed at Classical Next 2018, Festivals Maintenant, Mimi, Marathon, Astropolis. Their first album will be out late 2021.
Original concept by Sourdoreille Production, la Compagnie des Indes & Culturebox.
FIRST DISC (ADAMI/RADIO FRANCE) OUT ON DISQUAIRE DAY 2018 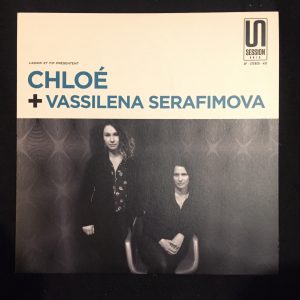 Chloé and Vassi were invited by Xavier Veilhan at Biennale de Venise: 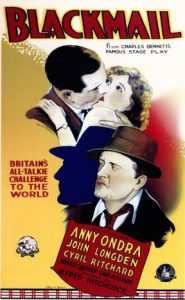 A very rare and silent Hitchock movie. During a date, Alice White (Anny Ondra) has a fight with her boyfriend, Scotland Yard Officer Frank Webber (John Longden), and decides to leave with an artist named Mr. Crewe (Cyril Ritchard). Whey they get to the artist’s flat, Mr. Crewe attempts to force himself on Alice, and she kills him to defend herself. Frank investigates the case and, after realizing Alice is the culprit, seeks to help her. However, a thief (Donald Calthrop) with blackmail on his mind complicates matters. 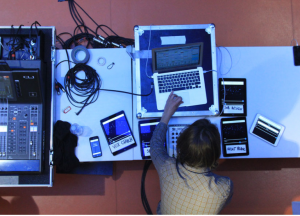 A work in constant progress with the prestigious IRCAM in Paris. The audience of Chloé’s show connect to  an app which allow them to download Chloé’s sound, remix them and send them back to Chloé for inclusion in her set.
The project began in 2014 and is still developping with state of the art technology. It can be a live show or an installation. 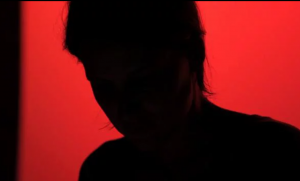 Slowmo is an improvised live performance. It premeried at TAP in Poitiers and Le Lieu Unique, Nantes in 2016 for the festival “Assis, Debout, Couché – audience was lying down during the show. See a video here. Chloé played Slowmo at Sonar 2018 and as a support for Suuns France tour. 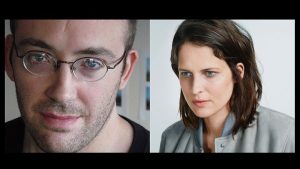 What do we get when an electronic musician who collaborates with artists and filmmakers meets a sound poet who learned writing with stage designers and visual artists? A duet where two universes meet, with a common hybrid and open practice, collaborating to produce an unidentified sound piece. Created at Festival Masnâa / Institut Français de Casablanca, Morocco in 2015. 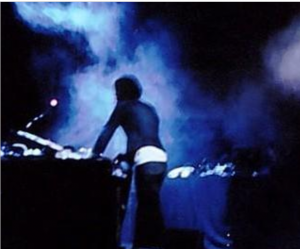 The  project was a command from Centre Pompidou and France Culture and premiered in Paris in 2011. Chloé mixes her music with the voices of surealist poets Man Ray, Marcel Duchamp, Louis Aragon… for a very surealistic show.  See a video here.