“With all that’s been written and said about Battleship Potemkin, we’re pretty certain it’s never been described as danceable”

COSMIC NEMAN INTERVIEW :
“The paris music institute offered us to make a new soundtrack for the Eisenstein movie, it’s not an obvious choice for zz, but it’s what made us wanting to do it. It was also good to show that we could do something else than a horror movie soundtrack and give this movie another interpretation. It’s such an avant garde movie that it didn’t seem weird to do it. And it’s a very musical movie, with a lot of rythm in the cuting pace which sometimes gets frenetic with scenes like the walk of soldiers, the machinerie and the engine of the boat. We thought that it could totally fit with our own machines and rythm.
I grew up with a lot of russian cullture from my parents, so I felt really close to that movie in many ways.
And there’s never been a proper score composed for the movie, Eisenstein used some of Chostakovitch stuff but it’s very classic compare to the movie, so we thought the movie could get a different approach with our music. And to perform the score live in a theater with the audience watching the movie like back in the days, when you had a piano player in the room illustrating the movie, makes the whole thing a lot more exciting!”

PRESS :
“Branchage is over for a third year, and this year’s Festival was made special by the amazing live soundtrack music by bands that came to Jersey to entertain and amaze. Zombie Zombie were a stunning addition to the programme with their truly stunning, powerful and beautiful soundtrack to the classic BATTLESHIP POTEMKIN on the “Duke of Normandy” tugboat in Jersey Harbour. The free event was watched by around 300 people from the harbourside, and the reports received have been that this was a highlight of all three Branchage festivals to date.
It was a really unique event, with Zombie Zombie stealing the Festival with one of the most talked about performances of the 4 days.” Branchage festival

“French electronic duo Zombie Zombie’s score, performed on a tugboat in St. Helier Docks, is also resolutely modern, with retro synths and drones accompanied by energetic drumming which has the entire crowd bobbing along in spite of the cold. The massacre at the Odessa Steps, probably the most (over) analysed sequence in all of film, is given a grotesque edge with a deathly march, while the dramatic conclusion builds to a deafening volume as the maelstrom echoes around the bay. You can’t get this kind of tension with the more conservative Cinematic Orchestra-style soundtracks.” The Quietus

“With all that’s been written and said about Battleship Potemkin, we’re pretty certain it’s never been described as danceable. Eisentstein’s classic tale of revolt on board the Potemkin battleship was screened on a tug boat in St Hellier harbour with a live score from French electro Kraut rockers Zombie Zombie, as the audience watched from the shore. Eisenstein uses the battleship as a microcosm to act out certain Marxist ideals in what is essentially a piece of propaganda. Yet the filming and editing techniques he experimented with – including his theories of montage – shaped much of modern cinema. The immense drama of the subject matter – the power struggle between the workers rising up for justice against their oppressive masters – lends itself perfectly to a live score. Zombie Zombie’s chugging and whirring was extremely well suited, at first adding a mechanical weight and texture to the huge boat, then exploding out to capture the revolutionary zeal of the sailors and the people of Odessa. They were also the only musicians to add their own effects onto the soundtrack, and to splendid affect.” 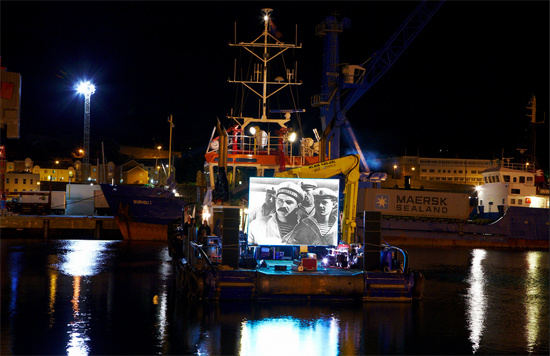 ZZ play the Potemkine on a tugboat in Jersey harbour, September 2010.