Bernardino Femminielli on board w. Tippex for Europe 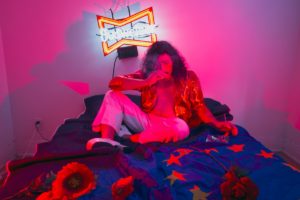 On stage, the hyper-sexual, genderless provocateur is joined by musicians from Essaie Pas and Bataille Solaire. More than typical concerts his shows are very intense performances with a lot of attention to details and scenography. His character is a synthesis of mysticism, danger and pleasure; a detached crooner deep within a distopian discotheque. Narrating in Spanish and French, from brutal italo-disco to heavy cosmic drone and mutant industrial, his sonic ventures reflect his chosen environments. In addition to his main project, he has composed music under Femminielli Noir (w/ Jesse Osborne-Lanthier) and is a long time collaborator of Alex Zhang Hungtai (Dirty Beaches). He has released a wide array of albums on tape (Hobo Cult, Los Discos Enfantasmes) and vinyl (Mind, Desire, Clandestine) and has performed at events and festivals around the world.