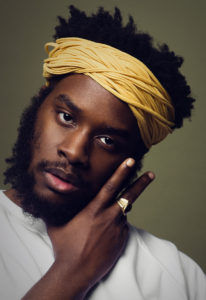 His music may strike you as both disturbing and refreshing, raw and still very complex. With the released of his mixtape MONGO premiered on The Fader last may, Abdu Ali strongly stated that his music knows no labels and no boundaries. A queer rapper from the exciting city of Baltimore, he adds powerful lyrics about racism and homophobia to both killer dance tracks and more experimental productions. Sometimes compared to Death Grips or other contemporary ‘noise rap’ bands, he has actually created his very own sound, influenced by punk, noise, afrofuturism and Bmore club music, based on his own experiences and personnal history. Known for his amazing energy on stage, Abdu Ali is one of the most exciting artists we’ve discovered lately and we’re very excited to bring him to Europe.

«Baltimore rapper Abdu Ali is one of the most versatile MCs out there right now — his willingness to rap over everything from experimental noise to explosive hip-hop makes that clear.» The Fader

«Brandishing the signature sound of the city and augmenting it with a bevy of overdriven 808s and assorted glitches, he counts Sun-Ra, Erykah Badu and Missy Elliott as influences.

On stage, I feel like I’m a martyr, like Joan Of Arc, delivering a message so people can feel motivated, feel alive and awake,” he says, which would seem contrived if not for the way Ali thrashes, headbangs, and two-steps at a punk rocker’s pace, dripping in sweat and showing James Brown levels of exertion. “You don’t get an understanding of who I am as an artist until you see me perform. The performance is the finale.” Noisey