Very pleased to announce the addition of the Polish avant trio LOTTO to the Tippex roster. A new album called VV has been released in late November on Instant Classic, the Krakow based label, responsible for a number of favorite albums at The Quietus in recent years.

LOTTO are an instrumental trio — Łukasz Rychlicki on electric guitar, Mike Majkowski on double bass, and Paweł Szpura on drums — blending the outer borders of jazz, country, noise, and minimal electronica, through repetitive structures and improvisation, creating a music that is both hypnotising and moving. Based between Warsaw and Berlin, they have been developing a cult-like following since forming and have performed at Unsound Festival, Off Festival, Krakow Jazz Autumn Festival, Festival Artacts Muku in St. Johann, Enjoy Jazz Festival in Heidelberg, Festival Densité in France, Nickelsdorf Konfrontationen in Austria, KRAAK Festival in Aalst, Belgium, as well as numerous club shows. Their second album, Elite Feline also won the ‘album of year’ on the highly renowned Polish newspaper, Wyborcza. 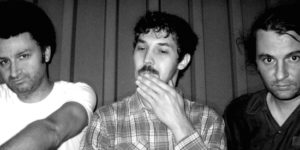 Availability: Europe/UK from 17 November to 25 November 2018, also available for fly-ins/special events throughout the year. For BOOKING enquiries please contact Tom

The propulsive trio snakes their noir-soaked negative-space jazziness all up and down your spine, tickling the reward centers of your brain as it passes. Oh, those endorphins are really kicking in now! – Tiny Mix Tapes

The group are like wild, porous-minded geniuses, clambering over improvisation that flows like feverish tangents of thought, before finding themselves blinking into a blazing epiphany, repeating a particular construct as a means of celebrating it. – ATTN:Magazine

Listening to this third album of the trio it really feels like riding a motorcycle… setting an overall psychedelic feel that evolves and grows… Listening consciously, you don’t really know what to expect; at any point and at any time something can change its route. – The Attic