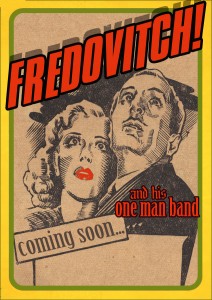 Back in Bordeaux after their last tour in Japan, Belly Button decided to split up. It was the beginning of their bass player, Fredovitch, solo project. Over the years the minimal bass guitar drums vocals songs from the first recordings turned into a sampler based garage rock supersonic formula one, where 60’s acoustic drums meet drum machines and fuzz guitars get along with synths and samplers with full energy. Touring as a full time member of King Khan and The Shrines and The Kitchenmen Fred didn’t have much time for his solo project. In 2012 Fredovitch and his one man band are back with a few avails, tasty new tracks and a crazy live show!