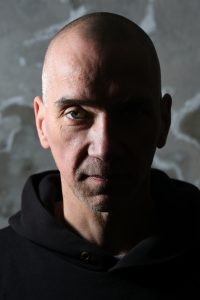 Much of a million magnets sounds as if Möbius has left the music to its own devices. As if he has given it space instead of closing it in and channelising. Little seems to be organised, reflected or calculated. Rather it booms and pulses and chugs and swells.

In 2015 Möbius invited the drummer ANDREA BELFI to record with him for his album Batagur Baska (Shitkatapult 2016). They spent a whole day in the studio at Funkhaus Nalepastraße, Berlin. Belfi implemented ideas from Möbius for various pieces and contributed his own ideas. Everything was recorded although in the end only one hi-hat track was used. All the other recordings were left to snooze and be forgotten in a folder on the computer. Years later Möbius discovered them again by chance during a train journey. He decided to answer Belfi’s powerful and concentrated drumming.

If sound recordings are used on specific tracks they start to lead a life of their own. Möbius mostly left Belfi’s recordings unedited. He took them as a trigger for the structure and character of new tracks. So we get the opening track ABAYANGA with its stoic pulse and airy cymbals. Or SCHLUCHT with such restless drums, fluttering feedback and the mantra-like spoken-song of YUKO MATSUYAMA. The magical HOW TO NEVER MAKE UP is almost a song: feverish percussion (Andrea Belfi on rimshots, ANSGAR WILKEN on the table top), a rich bass and the other worldly singing by JANA PLEWA.

The accordion on WINDJAMMER seems to blow in all directions at the same time, propelled by Belfi’s hounding cymbal playing. Side B starts with a reflection of Windjammer: DISCRETE WIRING. Guitar riffs in endlessly circling movement and Yuko Matsuyama’s voice and all that it conjures up. FEED ME FOG freely improvised with on drums and feedback is simply complete as a self-contained piece. The singing on CHAYYAM comes from the Cambodian PRAK CHUM, who’s voice can also be heard on the title track of Batagur Baska.

Guido Möbius is on tour with Julie Tippex for his new album, with the support of Initiativ Music. Berlin show: May 25th 2022, Arkaoda.